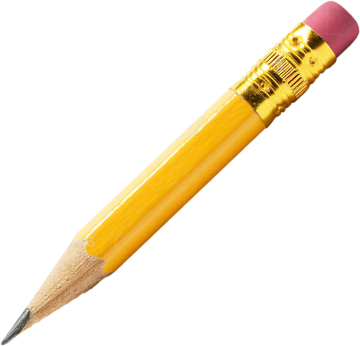 Things You Can Learn from the Invention of Pencils

‘A No 2 pencil and a dream can take you anywhere.’ This is a famous quote from the author Joyce Meyer explaining the connection between pencils and great ideas. Many of world’s best inventions started with a piece of paper and a pencil in hand. Are you using them too when you are playing around with your ideas? Here is an interesting story about the invention of pencils.

Philosophers in ancient Rome used a stylus, a thin metal stick, made from lead strips to scratch on papyrus sheets or wax tablets. The word pencil actually derives from the Latin word ‘pencillus’, meaning ‘little tail’ and describing small ink brushes of camel hair, that were used for writing before pencils as we know them today were invented.

But we can’t talk about modern day pencils until 1564, when a large deposit of graphite was found in Borrowdale, England. Did you know that the term graphite derives from the Greek word “to write”?

The discovery surprised the locals because they didn’t know what the material was. It looked like coal, but it didn’t burn. Then they discovered the raw material could made dark marks, better than the lead they used so far. They started marking sheep with it.

The problem graphite presented was that it was soft and hard to write with it. Just imagine how annoying it is when the point of your pencil breaks and in the beginning, it happened all the time.

Someone came up with an idea to wrap string around graphite to strengthen it. Then someone else devised a wooden stick, hollowed, so you could place the graphite inside to protect it from breaking so easily.

Work with what you have

While the British discovered the graphite, it was the French who are responsible for creating the pencils we know today. More precisely it was Nicholas-Jacques Conte of France in 1795.

Conte, a French painter, balloonist and an army officer, was asked to make a pencil without using too much graphite since the French Republic due to the economic blockade couldn’t get graphite from Great Britain. Conte created a modern-day pencil mixing powdered graphite with clay and putting the material between two half-cylinders of wood. He received a patent for the invention in 1795, and formed la Société Conté to make them.

But it was actually in Nuremberg, Germany were the first mass-production of pencils began in 1662. It was started by Faber-Castell and followed by Steadtler and other companies.

Today we can’t imagine not having a pencil at hand, though many have moved to computers for sketching their ideas. What do you do with your inventions? Submit it to us and let us help it see the light of day.