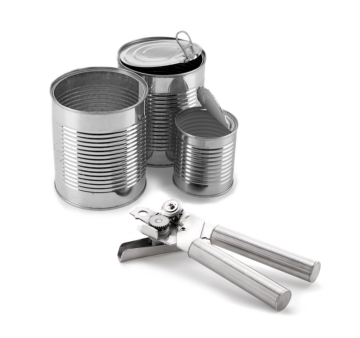 It is said that since 1972 around 3 trillion cans were produced. You too have a few at home. Can you imagine making dinner without using at least one? How to get food to his troops without the food spoiling was the question nagging Napoleon Bonaparte and he set to find a solution that lead to the invention of a can.

In 1795, Napoleon Bonaparte faced an interesting challenge. He had no way of supplying his troops in the battlefield with food. It all spoiled by the time it arrived to his army. He offered a prize for the solution - what to do with food, so it would remain unspoiled and still be edible when it traveled to the faraway places.

It was Nicholas Appert who won the prize, the 12,000 francs. He discovered though he didn’t understand why, that food remained fresh for long periods of time if it was sealed tight in a container and then warmed up.

But Peter Durand, a British merchant is credited with the invention of the world’s first iron and tin can. Using Appert’s sterilization method this was the beginning of food preservation.

This invention brought on a new issue. How to get the food out of the can? The first cans weren’t as slick and thin as the cans we know today. They were robust, thick, weighed more than the food inside and could be opened only if you resorted to pure force, usually literally using the hammer and chisel.

Do you have an idea you would like us to help you with?
Submit it and we’ll help you develop it.

Until 1846 one can took a lot of time to produce, so they weren’t widely used. But then Henry Evans invented a method for producing them faster. A year later Allen Taylor further improved the production. Now the cans became more popular. They were also thinner, so it was finally time to invent better tools that would open them.

Almost 50 years after the invention of the can, Ezra Warner patented the first can opener, which was also referred to as “bayonet and sickle”. It worked like this: the bayonet part punctured the can and held it in place, while the sickle part was used to then cut the lid. But since the opener left very rough edges on the can, it was dangerous. So the cans were generally opened in the stores by the grocers and people took them home opened. It is understandable why the invention never gained popularity.

In 1866 a new patent emerged, which was the tin can with its own opener. Something similar is todays still used on the packages of sardines.

The can opener that you probably have at home today was invented by William Lyman for years later. The design had a wheel that as it was rolled around the rim of the can, cut it open. The Star Can Company added jagged edges to the wheel, to make cutting even easier. The electric version was introduced in December of 1931.

We have introduced the invention of Safe Cover, unique solution for safe and hygienic drinking from beverage cans.

The first beverage to be canned was beer in 1931, then soon other beverages followed. It was all made easier when in 1959, Ermal Fraze invented the pop-top can. Today there are around 200 billion aluminum cans used every year.

The inventions dealing with cans continue. There is now a recent side-cutting model of a can opener.