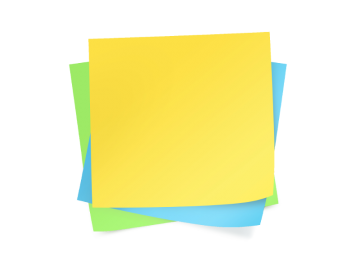 Things You Can Learn from the Invention of Post-It Notes

Walk into any of office almost anywhere in the world and sooner than later you’ll notice a pad of small yellow papers. The famous Post-It notes. You might have them at home, reminding you to take out the trash, what to buy in the grocery store or helping you remember an idea you had and quickly sketched it on them. Here is a story of how these indispensable papers were invented.

It was in 1968 when a man called Spencer Silver, an employee of the company 3M, a multinational conglomerate, was striving to make a super strong glue that could be used for assembling planes. Instead, by pure accident he created an incredibly weak, pressure sensitive adhesive

A solution without a problem

Yet 3M didn’t find the invention useful. They couldn’t’ think of the way to use it. There was only a solution - glue that could be easily peeled off, without any trace and could be reused. Silver spent five years trying to find a purpose without any success. Nobody really knew what kind of problem the invention could solve.

Silver thought the best way to use this invention was as a bulletin board sprayed with adhesive. Then you could stick or remove pieces of paper from it. The company discarded the idea because it wasn’t profitable.

Have an Idea?
Submit it and we’ll help you develop it.

It wasn’t until the chemical engineer Art Fry, who also worked at the company found the problem the invention could solve. He was a member of a church choir and he had trouble keeping his bookmark in the hymn book while singing. He believed Silver’s glue could keep the bookmark in the hymnal. He then proposed that they use it on a piece of paper instead of the boards.

It wasn’t as easy as they thought. The adhesive too often stayed on the object the paper was stuck to. Roger Merrill and Henry Courtney were in charge of fixing this problem. Yet still the management at 3M wasn’t convinced of the commercially success and the project waited for another three years. However, the invention was already popular at the company itself.

In 1977, 3M tested sales of this invention they called “Press ‘n Peel. The results weren’t encouraging, they showed nobody was interested. But not everyone was ready to give up, so a year later 3M tried again. They gave away free sample Post-It note pads. The order rate went from almost nothing to 90% of everyone who had gotten the samples.

“When Post-Its are still used after I am gone; it will be as if a part of me will live on forever.”  — Art Fry

Post-It notes at long last became a hit and today there probably isn’t an office without them. They are one of the bestselling office supply products in the world. Art Fry has said once: "When Post-Its are still used after I am gone; it will be as if a part of me will live on forever."

He most certainly will, as Post-It notes todays are used worldwide not just in offices, but in art, at home, as drink coaster…
Did you ever use them to scribble your ideas on?