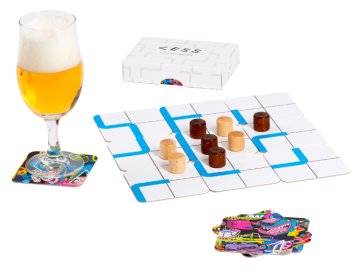 Things You Can Learn from the Invention of LESS board Game

Imagine going on a vacation and forgetting to bring books and games along. You might grow bored after a while. But if you are an inventor like Aleksandr Starovojtov, then you create a family game. One that with the help of Invented4 becomes the best-selling game in Slovenia.

Necessity and a challenge

Many great inventions were created out of necessity. Like when Aleksandr Starovojtov went on a vacation with his family. There he tried to find ways to spend quality time with kids because all the family games were left at home.

With some beer coasters from the local bar and pebbles from the beach he created a simple board game the whole family could play together. The first version of LESS game was born.

From an idea to a successful product

When Aleksandr came back home, he played the game with his friends who loved. So he worked on perfecting it further. The idea was great and he believed the game could be a success. He searched for a partner to take the game to the next level.

His next step was contacting us at Invented4 and together we improved the design and the packaging of the game. The final version of LESS was finally created.

Do you have an idea we can help you with? Submit it.

Once the product was finalized, the next step was bringing LESS to the market and making it a success for both the inventor and Invented4.

We presented the game to the public on Kickstarter in August 2015. The results were great as it was funded in 18 hours, received 1,230% of the goal and was listed in "Popular" and "Staff pick" categories. In addition, LESS game was listed in the Top 10 selection at crowdfund.com, Iwillnevergrowup.com and accrosstheboardgames.net.

I have a lot of ideas and do many things. It’s almost impossible to do them properly on my own. That is why I work with Invented4, a start-up company specialized in realization and marketing of good ideas. -- Aleksandr Starovojtov

The interest for the game grew further when the retailer Spar in Slovenia put the game on the shelves of its biggest stores in Slovenia and the game was shown in the TV show Štartaj Slovenija, which presents interesting start up products.

The retailers weren’t the only ones to see the potential of the game. Many companies found the game perfect for business presents and promotional purposes, too. Laško brewery, owned by Heineken, branded the coasters the game uses with their logo.

With help of White Castle Games agency the game attracted Asian game publisher Happy Baobab. This cooperation is a next step in the success of the game as it means it will now be offered across retail stores in Asia and Europe.

So next time you head out on a vacation, make sure you bring the game LESS along. Or maybe try and be creative and invent your own? Let us know and maybe we can help bring your idea to life and success too.